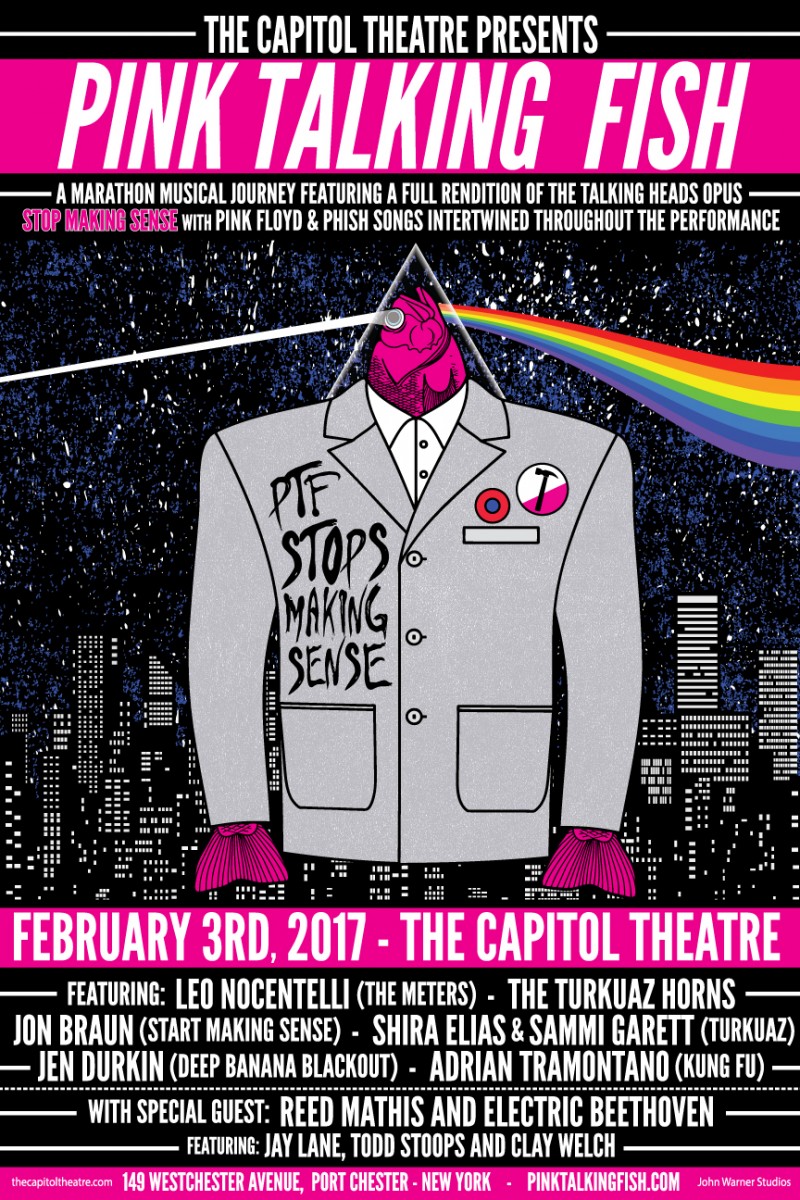 Buy tickets to the show now!

We hope you’ve marked your calendar for next weekend, because Pink Talking Fish will be playing The Capitol Theatre for the first time, with a laundry list of amazing special guests!  Friday, February 3rd, the band best known for weaving together Pink Floyd, Talking Heads, and Phish songs, will be playing Talking Head’s album Stop Making Sense in its entirety.  They’ll be joined by artists Leo Nocentelli (The Meters), The Turkuaz horns, Shira Elias & Sammi Garett (Turkuaz), Jen Durkin (Deep Banana Blackout), Jon Braun (Start Making Sense), and Adrian Tramontano (Kung Fu), as well as Electric Beethoven as support.  We took a moment to talk to Dave Brunyak, Pink Talking Fish’s guitarist, about the excitement coming in just a week.

PTF has been on the move for the last few years, 2016 being wildly busy for you all. Another new and exciting year is upon us, you’re just digging into this Winter 2017 tour… how are you feeling about it?

Winter 2017 is particularly exciting because we will be visiting many of the venues on this tour for the first time.  A few of the stops along the way have been staples in previous tours and there is comfort in the familiarity and in the relationships we’ve built there, but there’s something electric about playing in uncharted territory. It puts our entire arsenal on the table.

How stoked are you to play the The Capitol Theatre for the first time?

PTF has played The Cap’s adjoining venue Garcia’s a few times in recent years, most notably as the late-night feature of Phil Lesh’s 70th birthday party, but this will be our first time in the big room.  Let’s be real: this is a world-class venue. Playing a room that has hosted the greatest of greats such as Pink Floyd, Phish, The Grateful Dead, The Rolling Stones, David Bowie, and Bob Dylan is thrilling and humbling at the same time.  It’s a special, almost indescribable feeling to have an opportunity to bring our show to a “Hall of Kings” like The Capitol Theatre.

Do you ever get the pre-tour jitters? pre-show jitters?

Sure. I’d be worried if I didn’t get a little nervous because I’d likely be forgetting something important.  There’s a lot to remember. Some of the transitions between songs are made up an hour before show time during our routine pre-show discussion about the set.  By the way, if you walked in on one if those sessions, you’d think we were all on drugs.  Imagine four guys sitting in a circle making a variety of beatbox noises and badly scatted melodies and you’re pretty much backstage with PTF.  Add a campfire and some peyote and we’re all on a spiritual journey. Substitute the campfire and peyote with a bangin’ sound and lighting package and you have PTF Tour!  The peyote is optional.

Has Stop Making Sense been on PTF’s radar forever or a more recent idea?

Pink Floyd, The Talking Heads, and Phish provide an enormous menu of concepts to explore in our live performances. “Dark Side of the Moon” and “Gamehendge” stood out early in our career as marquee platforms for designing shows and we made sure those events were at the right time and place to hit homeruns. When I think of the Talking Heads in that respect, I think of “Stop Making Sense” as being the feature attraction in their catalogue.  We’ve been planning this show for a long time, waiting for the perfect opportunity to put it on display for the first time.

What makes this specific piece stand out more than others?

It’s interesting to me that we’re doing our first concept show reimagining a live concert experience. Beyond the music, there are visual themes that we can’t afford to do without.  With that in mind, there’s no way we could get this done as a quartet.  We’ve brought on a slew of stars as special guests to help us get that big sound.  Along with a few familiar bells and whistles, I think we’re set up to really burn the house down with this one.

How did you know this was the night for the musical marathon that is PTF’s release of Stop Making Sense? .

Like I said before, a performance at The Capitol Theater demands our very best. We’ve done a lot of Phish and Pink Floyd concepts up to now, so Stop Making Sense was really a no-brainer.

You’ve got an all star line-up coming in the help the cause, how did these people come together?

We are good friends with Turkuaz and love playing with them so that was an easy one.  The Capitol Theatre actually suggested Jen Durkin.  They love her!  We’ve heard such great things about Start Making Sense and thought that including their lead singer, Jon Braun, would be a great way to connect our two bands.  We are very excited to be working with him!  Adrian from Kung Fu has played with PTF on many occasions and is a good friend.  We always love when he is onstage with us.

As for Leo Nocentelli, we wanted to have a classic player be a part of this and our booking agent suggested that he would be a good fit.  Our bassist and band leader, Eric Gould, called him up and he was very excited about being a part of the show.  We are honored to have a musical legend like Leo on board for this experience.

We also have Electric Beethoven opening the show.  On top of them being in the family of unique tribute, they also are filled with amazing players in our scene like Reed Mathis, Jay Lane and Todd Stoops.

What would you tell someone that was hesitant to come to this show (not that anyone actually is)?

Hopefully you’ve seen the Talking Heads live footage and maybe you’ve seen another fine act recreate the experience authentically and that’s great, too.  We will be doing something quite different: the songs are putty for us to shape and mold into an ever-changing sonic landscape. We’re weaving in Phish and Pink Floyd songs that best fit the flavor of Stop Making Sense and we have enlisted a parade of all-stars to help us out.  With or without the peyote, we’re aiming for a spiritual journey.  This will be a once-in-a-lifetime event. And, there’s beer! 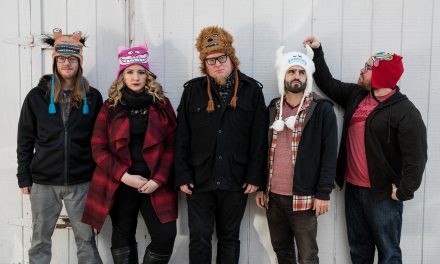