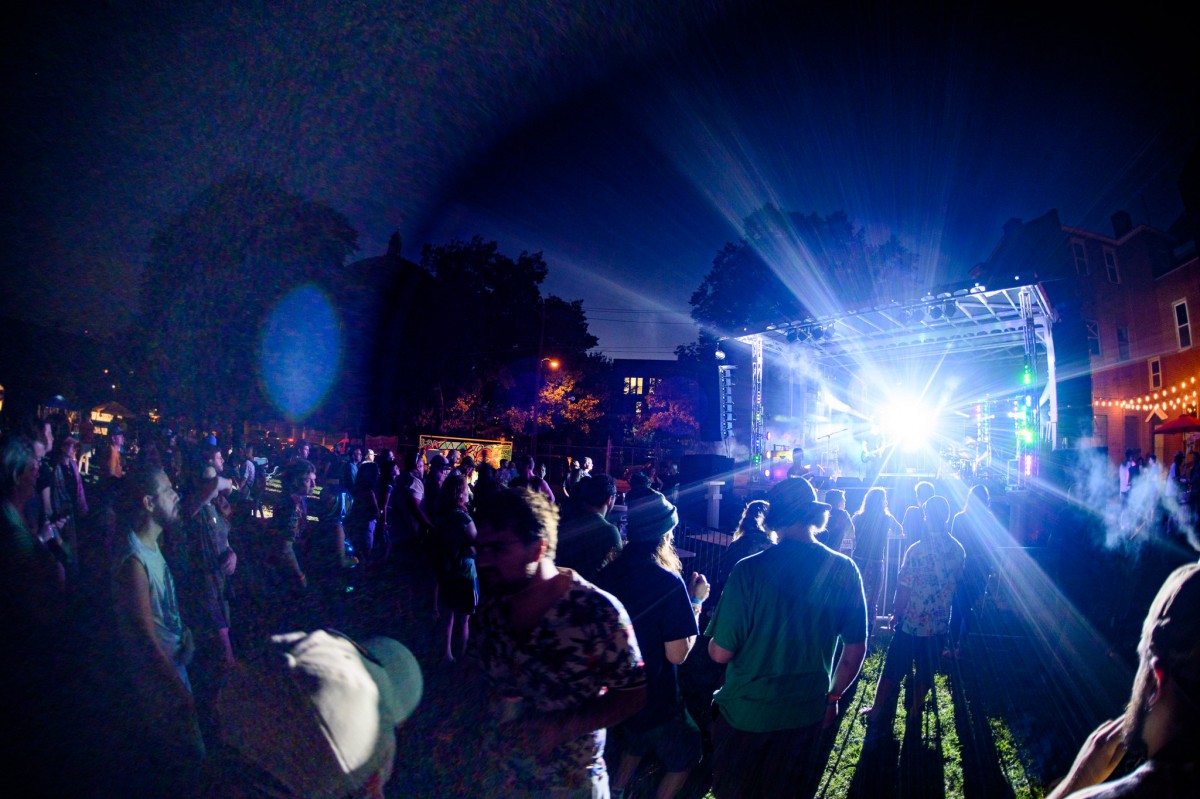 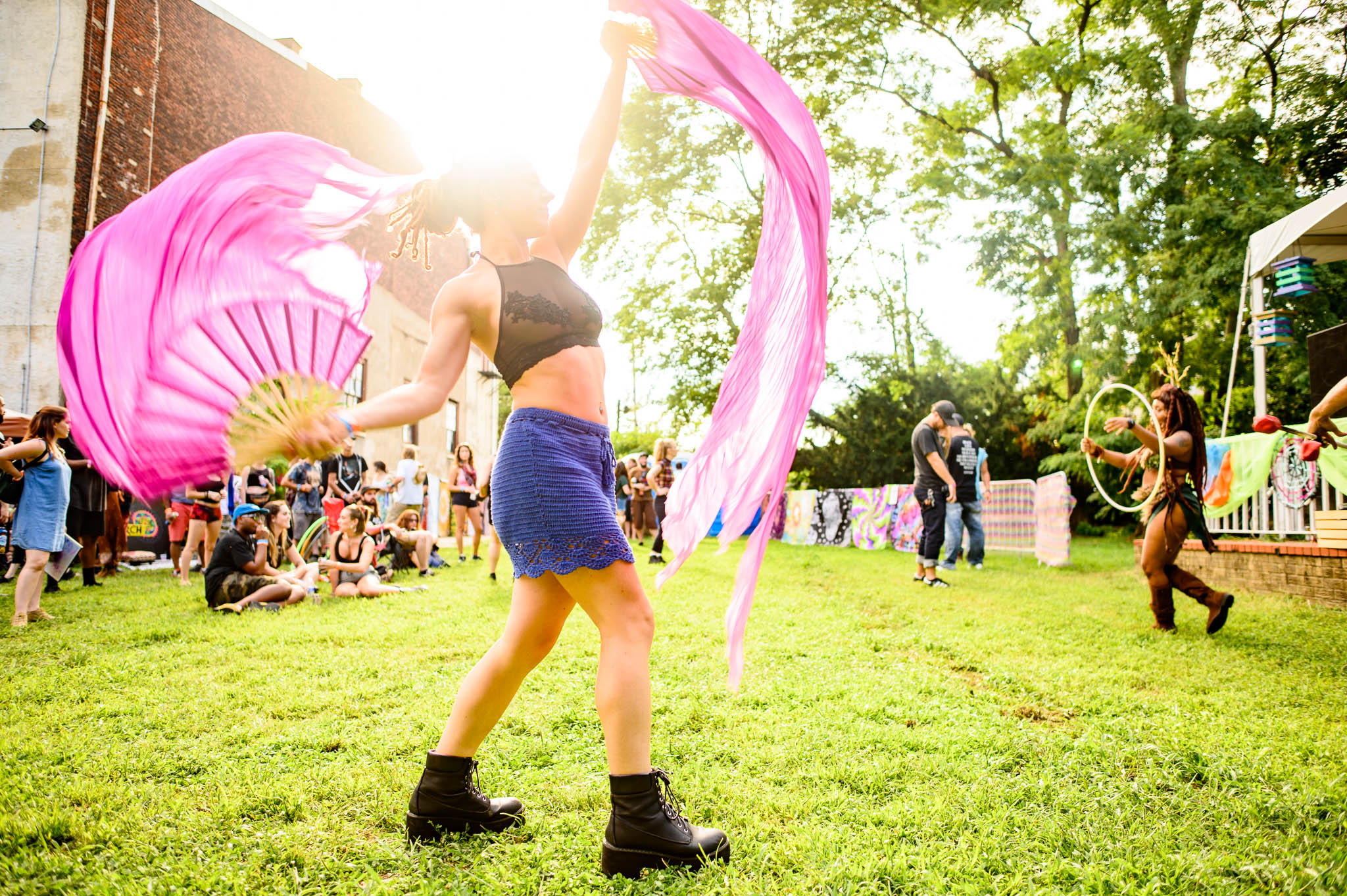 Entering its third year, the festival has settled into a nice groove at the Ukie Club on Franklin in downtown Philadelphia. Located just over a mile west of Philly’s beloved Fishtown, the Ukie Club provides a perfect home for SENSORiUM. Tucked behind the massive, concrete exterior of the social club sprawls a lush lawn surrounded by a generous amount of trees. As I eagerly waited in line for my ticket, I caught a glimpse of a giant, inflatable mushroom welcoming me to Wonderland. Generating a feeling most comparable to that of Alice as she fell down the rabbit hole for the very first time, entering the gates of SENSORiUM feels like stepping into a new world — or at least a world that isn’t located in downtown Philadelphia. In the background, the stunning, gold-infused glass dome of the Ukranian Catholic Cathedral is visible alongside fleeting views of the city skyline peeking through the trees.

Kicking off at noon, the festival featured over 20 artists across three stages. Early birds were greeted with a selection of goodies from the festival’s sponsors, including complimentary mini Federal Donuts, yerba mate from Guayaki, and canned draft lattes courtesy of Philly’s own La Colombe. First up on the Milky Way Stage, trance-funk Solar Circuit got things started with a special guest appearance by Keith Wadsworth. Making up part of the Wax Future duo, Wadsworth joined a talented line-up of artist-at-large including Zone Drums, NYC-based lyricist Rasp 5, violinist Charlie Field, and jazz saxophonist Keegan Tawa. 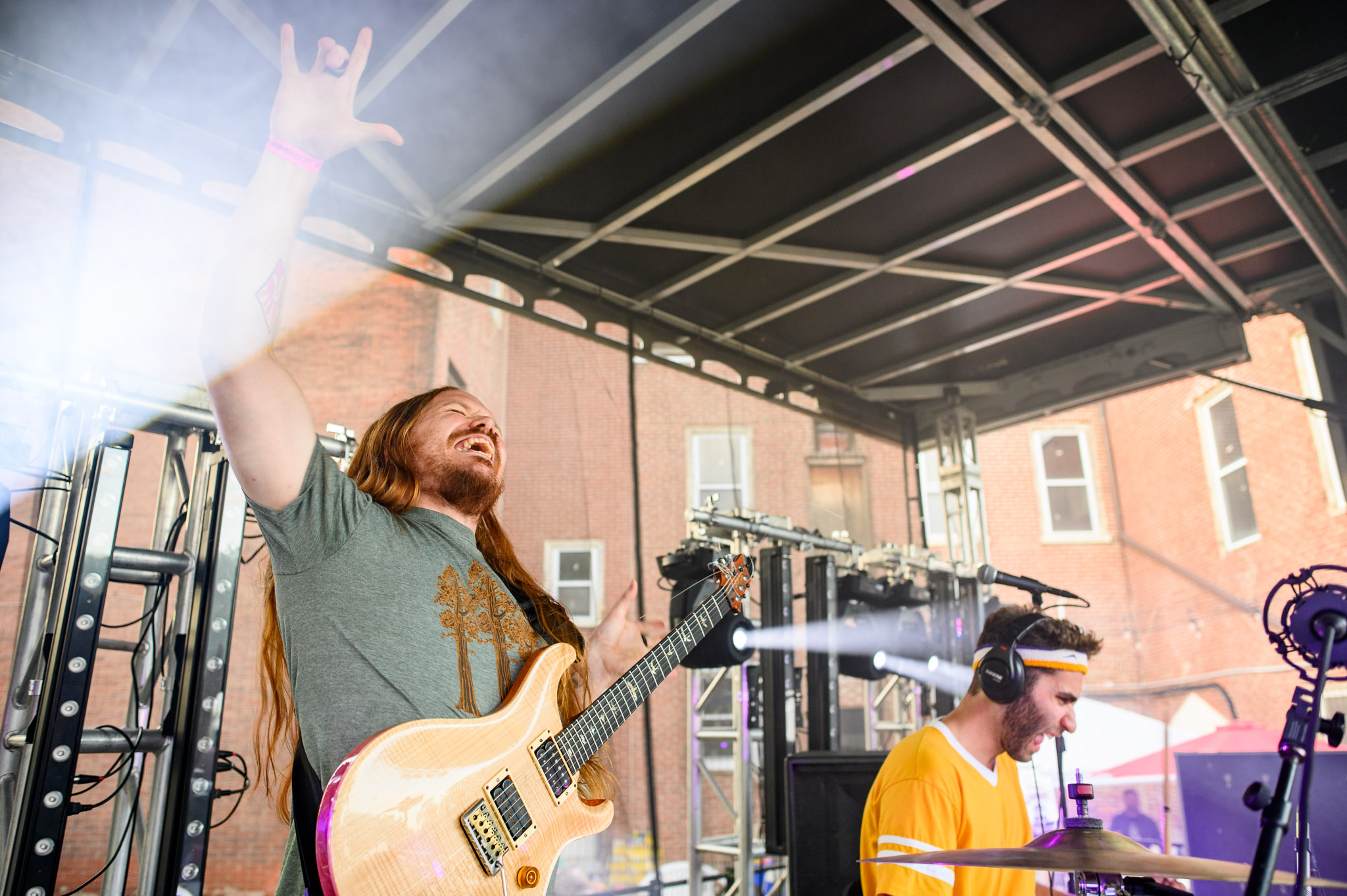 Opening up the Andromeda stage, Wessanders showed us that it’s never too early to get weird with his glitchy-dub beats. Followed by Tygris, Face Plant, and Malakai, the Andromeda stage hosted primarily producers and electronic acts. At the Milky Way stage, progressive jazz sister band to Out of the Beardspace, Deep Creature, offered up a nice blend of electronic and improvisation, after which PA jam staple Flux Capacitor continued the flow with their progressive development and melodic focus. Brooklyn’s Space Bacon stepped up to the plate and hit it out of the park, delivering a silky smooth set of electronic-influenced jam. Joined by their adoring fans, the Baconators, their warm, sunny tone was the perfect match for such a warm, sunny day. At twilight, the joint venture of Sam Andrus (5 AM), Tygris, and Aaron Harel (Zone Drums), 5 AM Trio took to the stage and took the crowd to outer space. Smigonaut, audio engineer and trained jazz musician, closed out the Andromeda stage with his unique style – bouncy and light, with a touch of grit.

Festival founders and Philadelphia natives, Tweed took the Milky way stage by storm with their fierce 1980’s athletic attire (that I genuinely hope will make a comeback next year). The group was joined by Tyler “The Tweedler” Hefke, manning the old-school exercise bike side-stage. Self-described “funktronic powerhouse,” Tweed did not hesitate to dive into long jams rounded off with a healthy dose of funk undertones and catchy melodies. The band’s latest single “Moves,” dropped just two weeks ago, was met with enthusiasm as the crowd sang along to every word. Aligning with their throwback motif, mid-set the group was joined by violinist Charlie Field for a fantastic interpretation of Brittany Spears’ “Toxic.” It was clear to see that the fine gentleman in Tweed were having a great time, and that positive energy flowed freely through the crowd. It was clear to see that a great deal of love and care had been poured into SENSORiUM – and this is what it’s all about. 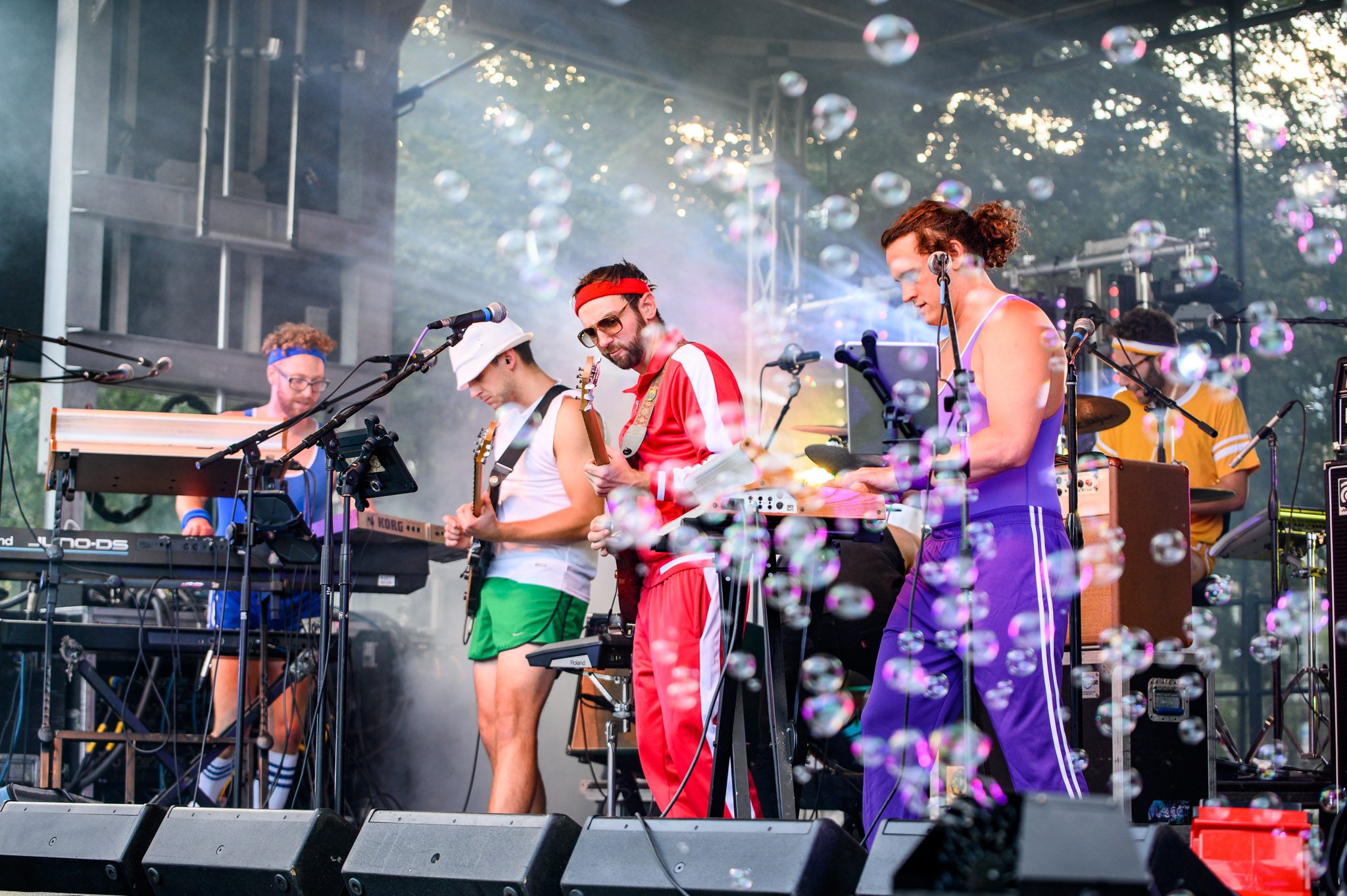 Next up, the Milky Way stage welcomed El Ten Eleven just as the sun began to descend. Hailing from Los Angeles, Kristian Dunn and Tim Fogarty were greeted by an enthusiastic crowd. With a guitar, double neck bass, a looper, and some percussion, the group has an impressively well-rounded sound. The duo’s music has an unmistakable West Coast feel; their set brought on feelings of warm familiarity akin to sitting in the sun, listening to the waves pass by. “My Only Swerving” was a favorite as the crowd looked on with languid smiles, eyes closed, swaying gently with the music. A refreshing change from the jam and darker electronic acts that stacked the lineup. Effectively a musical chill pill, El Ten Eleven provided the perfect sunset soundtrack to round of a gorgeous day.

With night officially upon us, Tobacco closed out the Milky Way stage with his deliciously dark, experimental beats. Joined by fellow Black Moth Super Rainbow bandmate, The Seven Fields of Aphelion, the pair wasted no time getting down to business, taking the crowd on a psychedelic journey. The set featured a trippy flow vaguely reminiscent of a distorted SNES track (Zombies Ate My Neighbors comes to mind). It seemed as if each song began almost immediately after the previous had finished, creating a pleasantly jarring reality check as the tones and frequencies took a sharp turn. I was pleasantly surprised when the duo dove into a cover of Eric Carmen’s 1987 Dirty Dancing hit, “Hungry Eyes.” To put it simply, the set was just weird — and I mean that in the best possible way. 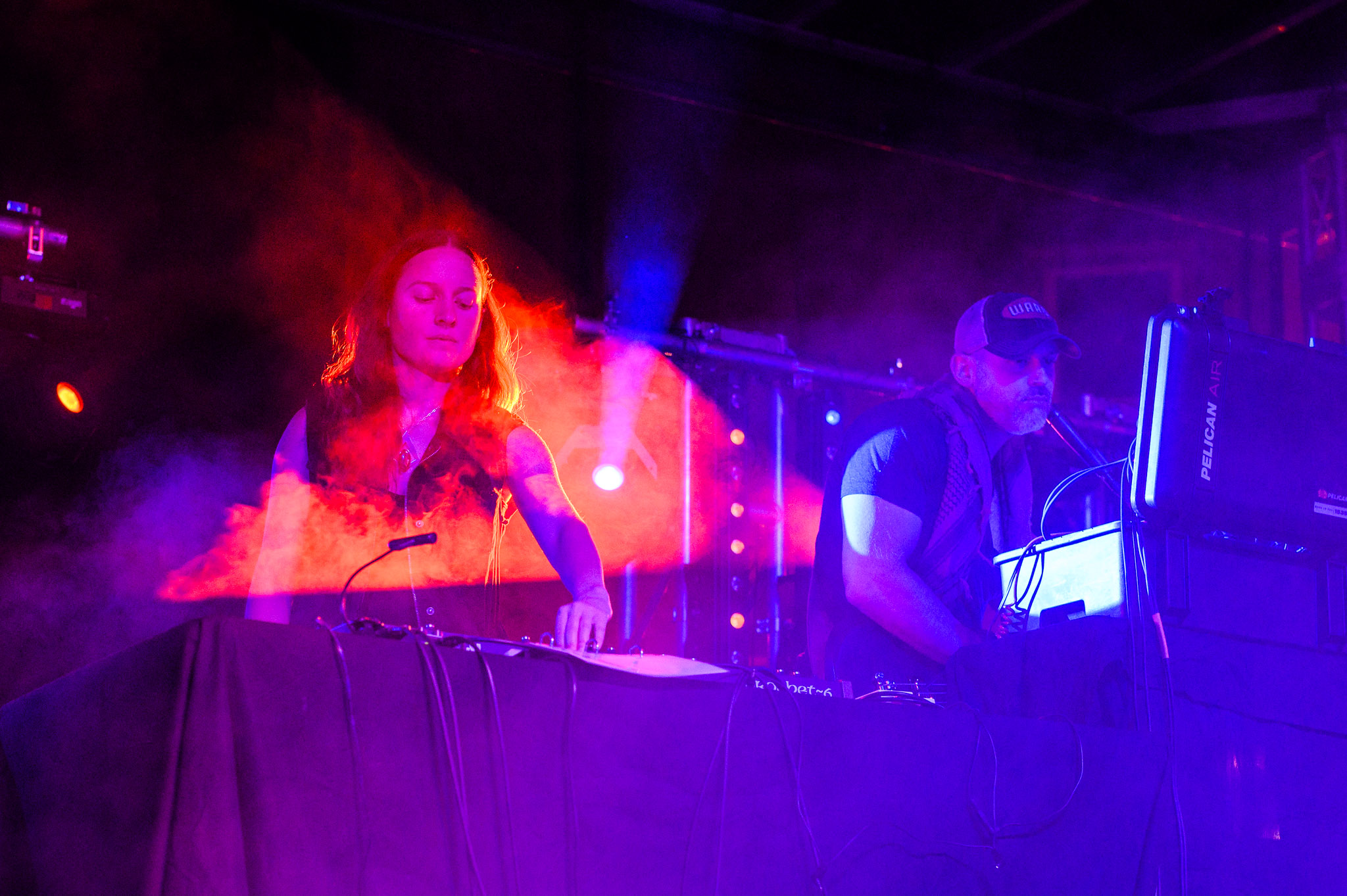 Tobacco and The Seven Fields of Aphelion

With the Milky Way and Andromeda stages closed, the festival moved inside to the more intimate Black Hole. The rumors are true, it will suck you in. Firing up at 1:45 in the afternoon with Newpy Hundo, the party didn’t stop until well after midnight when Wax Future shut things down. Keeping the crowd moving, the Black Hole featured a number of EDM acts including Stamolou, Jabair, Nah Mean?, Patrick Richards, Goldenspiral, and Agent Zero. With low lighting and fast music, entering the Black Hole felt like walking into a club. Accompanied by the tremendous talent behind DRO1D Visuals, the afterparty kept the vibe alive with acts scheduled until 2 AM. The night began with Bad Leather, liquid disco side project of Tweed’s Joe Vela. Beard O Bees (aka Lotus’ Jesse Miller) kept the party moving with his synth-heavy, analog mixes. For an extra special treat, Wax Future joined Beard O Bees, performing their new Beeswax EP for the first time live. Philadelphia’s own Wax Future took the crowd into Sunday morning with their upbeat blend of hip-hop and funk driven beats. Accompanied by Keith Wadsworth on guitar, Connor Hansell produces their sound, leaning heavily on vinyl samples and analog gear. Toeing the line between organic and electronic, the duo delivered the high energy performance that we’ve come to know and love them for undoubtedly ending SENSORiUM on a high note

Providing countless food and beverage options, including an abundance of vegetarian-friendly bites, festival organizers did a great job in making sure there was something on the menu for everyone to enjoy. Fans could fuel up at a number of food trucks, serving up everything from arancini to banh mi to creme brulee. Water was readily available and lemonade was provided for free, maintaining everyone’s happiness and hydration. Mixed drinks were sold indoors at Ukie Club’s full cash bar and beers were located at numerous tents for a very reasonable price. Asking only $3 for a PBR — now that is looking out for your fans! 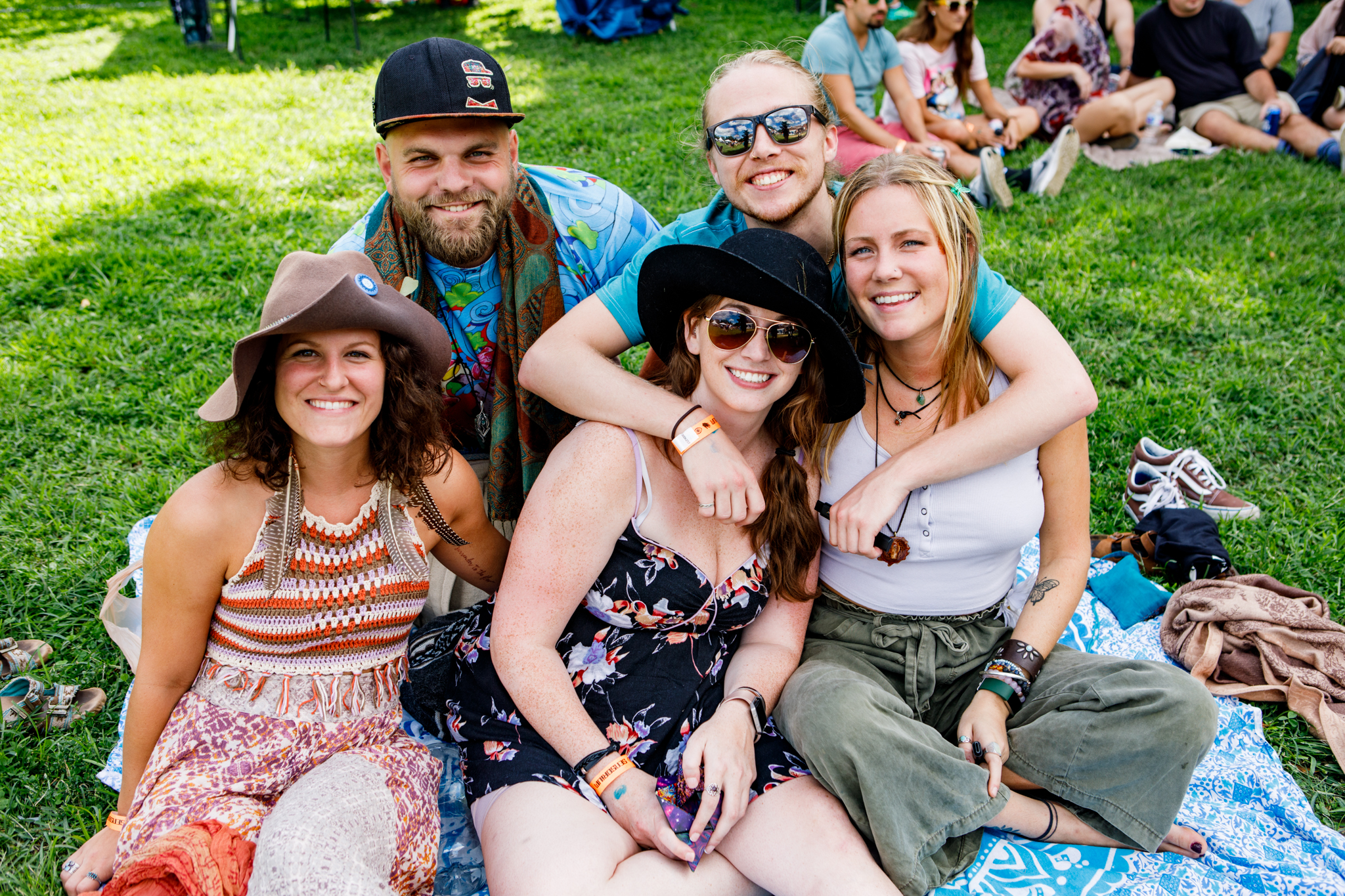 The festival hosted countless additional activities and art installations for attendees to enjoy throughout the day. Workshops, focusing on topics like yoga, tie dye, and crafting the perfect pasta sauce, added an interactive element to the fest. Games like Kan Jam and giant croquet, complete with huge hoops and mallets, were set up across the Ukie Club lawn. For those looking for a challenge, the festival brochure included a scavenger hunt. Promising a “giant prize” from the merch booth, participants were to complete tasks like getting their face painted, snapping a photo of a man bun, and meeting the head wook. The art gallery, presented by pARTS, hosted live-painting, tie-dyeing, and a wide range of works from SENSORiUM’s featured artists. Dan Sullivan and Oliver Weerts of Evan Shore Bangers demonstrated glass-blowing. Throughout the day, flow artists mingled with the crowd, eventually lighting up for some side-stage fire spinning once night had fallen. Watching the flow artists tap into their groove and adapt to each beat was mesmerizing, accompanying the music naturally. Vendor row included art, gems, clothes, pins, and sponsor booths. A highlight was the inclusion of Dance Safe, a national nonprofit organization focused on harm-reduction in the music community by offering free on-site drug purity tests and advice on safe consumption. I applaud festival organizers for recognizing the role education and awareness play in keeping everyone safe.

Celebrating its third year running, SENSORiUM 2019 boasted a stacked lineup, nice people, an inclusive environment, great food, an abundance of art – and to top if off, perfect weather (seriously, could you ask for a more perfect day?!) SENSORiUM has cultivated a wonderfully welcoming environment, meeting its mission to “leave a positive impact and create an unforgettable experiential party for everyone […] a space for everyone to feel welcome and loved.” A refreshing change from the “real” world, the festival provides a respite from the typical day to day. 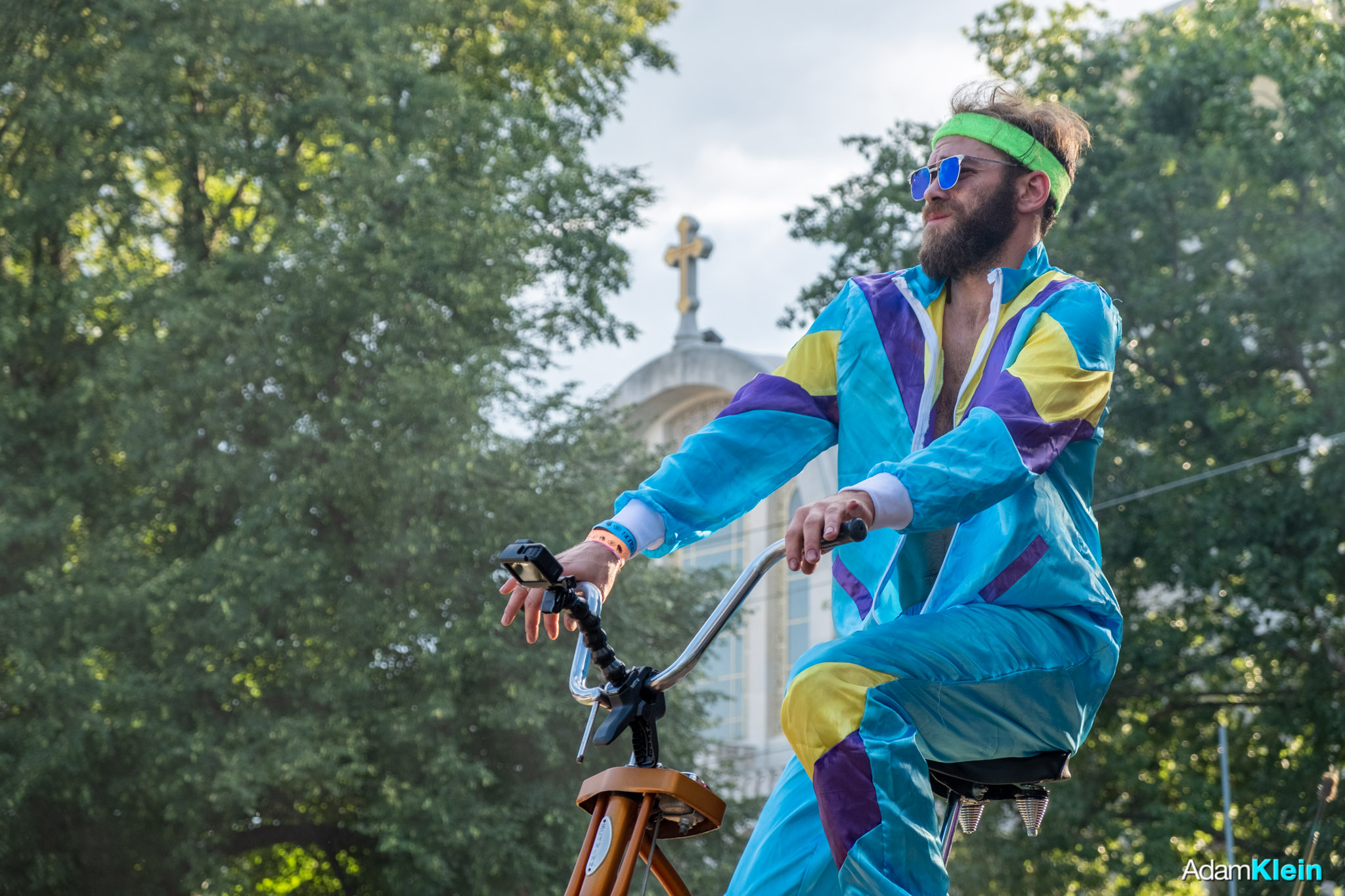 Ready to relive SENSORiUM 2019? Revisit the best of the 2019 line-up with the playlist linked below. Check out the festival’s site to stay up to date on all things SENSORiUM and be sure to check out their Instagram or Facebook page to stay in the loop for information on next year’s fest and other sensational events! 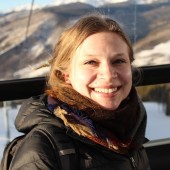 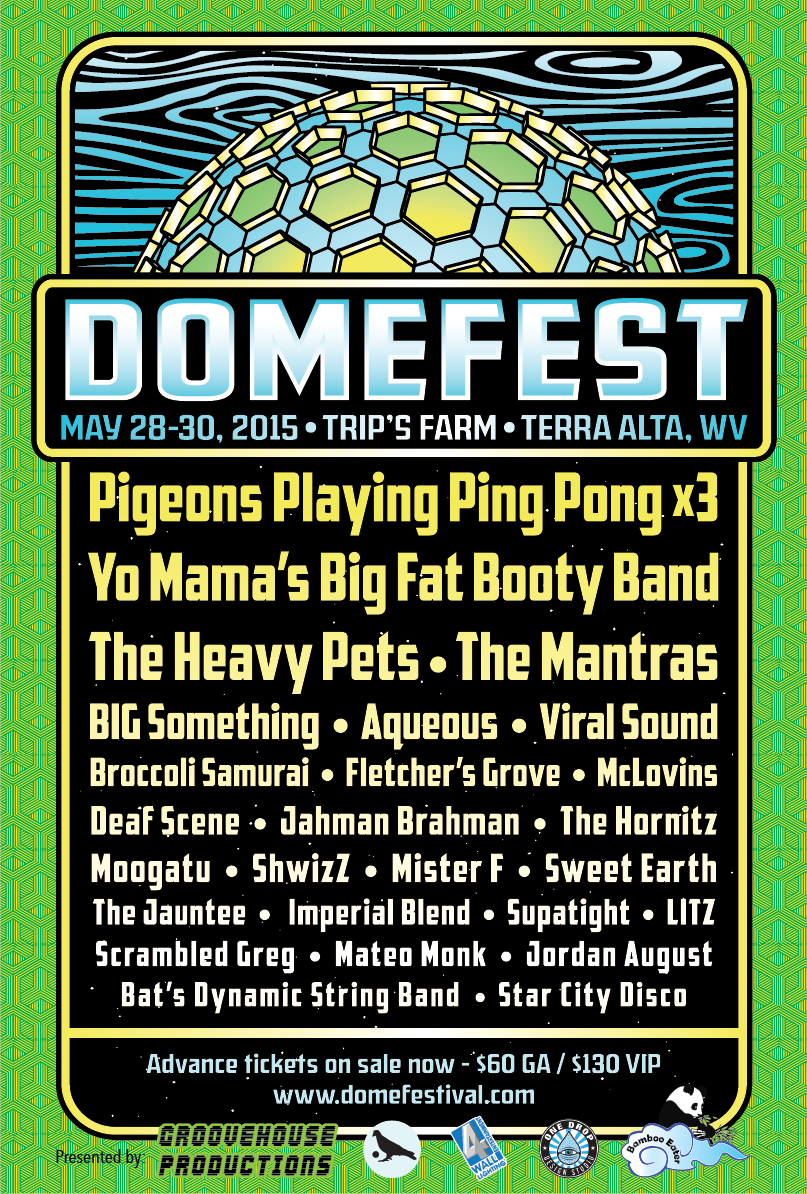 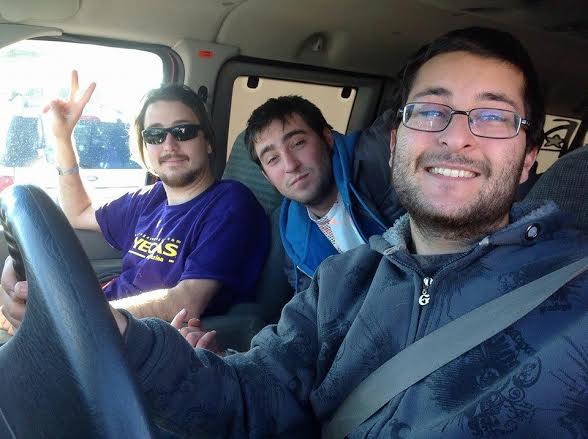 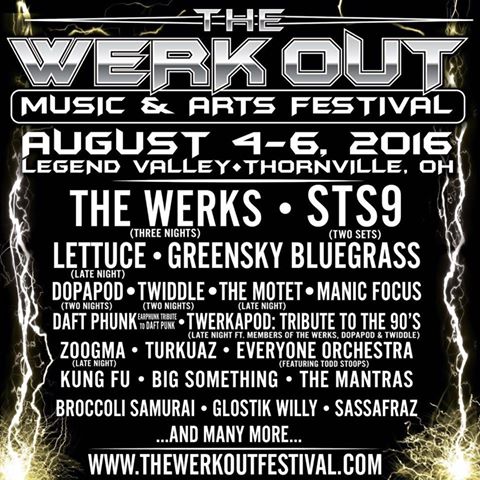 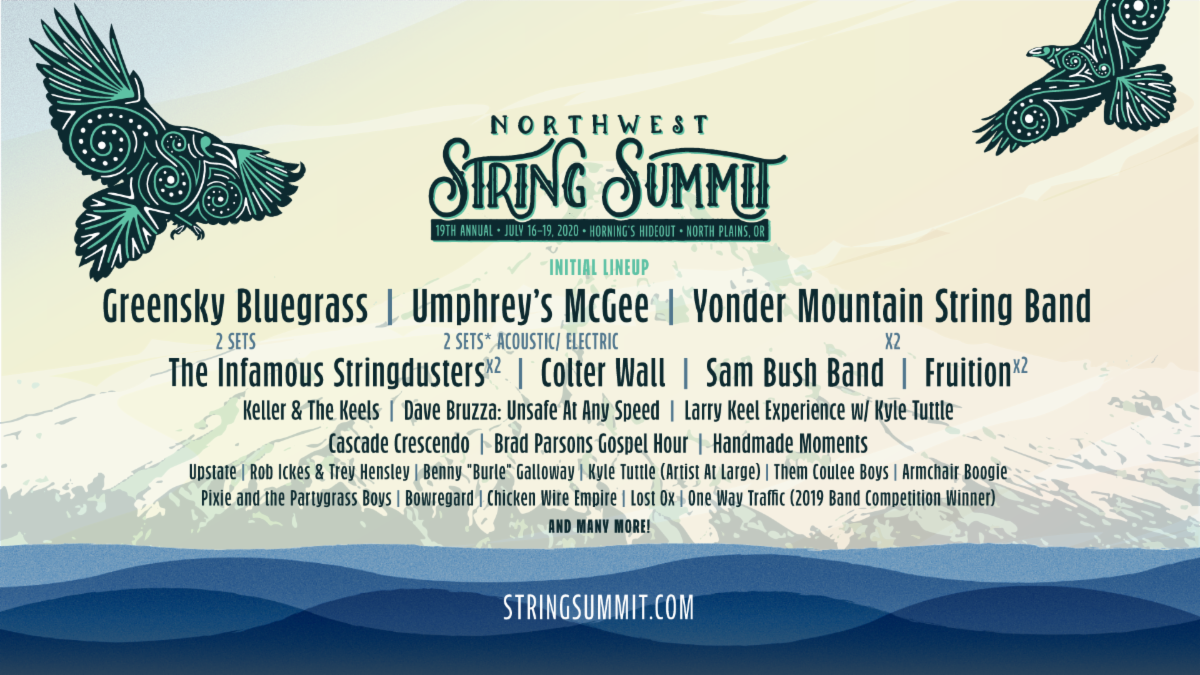